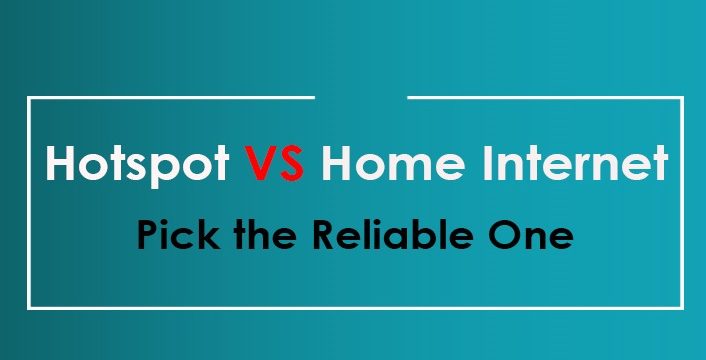 Mobile carriers are offering a massive amount of premium mobile data. So much so, that light broadband users are forced to reconsider keeping their wired subscriptions intact. Switching on their wireless mobile hotspot sounds like a promising option. For people who are often on the go, mobile data sounds like a viable option. For others, it is a little tricky.

This decision is not as simple as that. There are other factors involved, which determine what will suit your online needs the best. This blog will make a mobile hotspot vs home Internet comparison to enlighten you about your connectivity options.

It is a common notion that home internet is fast. But it is not true. Your mobile data is 10 times faster than your home Wi-Fi. However, we will consider various other factors in addition to speed for you to make a well-informed decision.

Mobile networks have improved their internet speeds immensely over the years. In theoretical situations, there isn’t a huge difference between the speed of your home Wi-Fi and 4G. Both advertise 1000 Mbps speeds. However, the speeds vary according to various circumstances.

Moreover, home internet, wired or wireless, is meant for shared web access. But sharing mobile data with many devices will cause speed lags. The following factors add to the fluctuating speeds of mobile internet and in turn the mobile hotspot:

Mobile internet speed relies on coverage. Is the coverage substantial? Are there enough towers and hotspots to ensure good coverage? If yes, only then you can expect to enjoy the promised speeds.

Your mobile internet and hotspot can be interfered with by walls, buildings, and other electronics operating on the same frequency.

Are users moving around or static? The number of people connected to the same tower and hotspot will also determine the speed recipients get.

If all these factors are favorable, mobile internet is more reliable and you would encounter an internet outage rarely.

The latter, shared by ten users will result in a slower connection than the former. If you make a mobile hotspot vs home Internet comparison, this is somewhat true for both. However, the mobile hotspot is more reliable. Because with the mobile internet, there are no peak hours exactly. Even if you are the only one using your home internet, if it’s peak hour, many users in your neighborhood are sharing the same bandwidth.

Mobile data plans are not very generous. However, the trend is changing and many carriers are now offering plans with unlimited data. Still, the home internet plans clearly win here. The mobile internet plans are expensive and if you are not careful about your online activities, you will run out of your data pretty soon. This means more bill pay!

Most ISPs offer plans with no data volume restrictions. For those who do, you will only experience throttling upon reaching your data limit. They also offer a grace period and free Mbps once you reach your data limit. For instance, you get to use Cox free internet until you pay your monthly bill.

Typically, a Wi-Fi router that operates on a 2.4 GHz band covers around 150 feet indoors and around 300 feet outdoors. Therefore, as long as you stay within this range, you will be able to enjoy an active internet connection. With a mobile internet hotspot, you get to enjoy up and running the internet anywhere you want.

During commutes, in a hotel room, and while shopping, a mobile hotspot can be a lifesaver.

Number of Devices That Can Connect

The 3G-enabled hotspot can typically connect up to five devices at a time. Whereas, a 4G-enabled hotspot can connect as many as ten devices simultaneously. However, with a USB C hub data stick, the number of connected devices can be infinite. Just make sure you enable Internet safety for kids on your devices if you have kids in the house.

When it comes to home internet Wi-Fi, the number of devices is unlimited. For instance, if you have Cox internet, there are no Cox hidden fees on connecting devices. You can connect as many devices as you please.

Although 5G sounds like a promising milestone in the internet world, it still is in its primeval phase. Therefore, making a comparison at this point is not possible. Moreover, its infrastructure isn’t built fully yet and mobile carriers plan to offer it only in select states and regions.

Until the said technology is refined, we still have the aforementioned options.